What Is The Zipper Merge?

The zipper merge is one way that drivers can merge from one lane to another if they notice a lane closure is coming up. Often times lanes close on highways or city streets due to construction or traffic accidents, and these areas can cause headaches for all drivers on the road. With this merged system, drivers are able to utilize both lanes of traffic until the defined merge area. At the point where the lane ends, drivers will take turns alternating through a “zipper-like” pattern where cars funnel into the open lane.  The Department of Transportations recommends this method for several reasons, including:

Even though some drivers think that passing drivers are personally insulting them, the truth is that in heavily congested, slow-moving traffic situations drivers need to do everything they can to keep traffic moving. This is not only in their personal best interest, but it is also in the interest of all drivers on the road.

When most drivers first see a “lane closed ahead” many people try to merge into the appropriate lane too quickly. This type of merging pattern is called the “early merge,” and it is one of the most common driving patterns among American drivers. The process of merging early requires both drivers who are joining and drivers who are allowing other cars into their lane to slow down. This driving behavior can lead to unexpected lane switching, traffic flow issues, and even increase the likelihood of serious crashes.  The best way to keep traffic moving and reduce the likelihood of causing a dangerous situation is to use both lanes for as long as possible and then alternate merging vehicles into the open lane using the “zipper merge.” While this sounds counterintuitive, there has been much research around this issue to show that utilizing both lanes for as long as possible can dramatically increase the throughput of a given area. Most drivers choose the “early merge” approach when they see a lane closed ahead because they want to be nice and don’t want to “cheat” other drivers. However, the truth is that it is safer and more efficient to remain in your current lane until you reach the defined merge area and then take turns merging into the open lane.

Why The Zipper Merge Isn’t Perfect

While the zipper method is the most efficient and safest way to merge two lanes, it is not perfect. Even though the data shows this method is the best way to merge, the human sense of being “cheated” by a driver passing them in a lane that is about to end often makes the zipper merge inefficient. Here are a few of the most notable factors that reduce the effectiveness of the zipper merge and could cause some drivers to be angry when seeing other drivers engaging in this driving patter.

When people merge early, they are stuck in a backed up and slow moving lane. After sitting in that lane for an extended period of time, many drivers become stressed and can develop road rage. It is important to note that while drivers in the open lane technically have the right of way, all merging etiquette laws suggest that drivers should let merging vehicles into their lane if safe and appropriate.

Many drivers think that when they see a “lane closed ahead” sign that everyone should move to the open lane as soon as possible. This mentality can breed a sense of entitlement for drivers in the open lane, and as result drivers who are looking to merge could face a dangerous situation is they are not allowed into the open lane.  If no one lets the driver in from the closed lane, that driver might be forced to act aggressively, and this could cause an accident.

Road rage can hit the nicest people and push someone into a sense of “warrior justice.” Sitting in traffic that is not moving can raise anger quickly, and this is only multiplied in a person’s mind when they see cars speeding by them in a lane that is soon to close. As a result, drivers who have had to sit through the merging traffic are less likely to allow other drivers into their lane.

Due to the above errors in how we interpret merging traffic, many people will choose to either join early or not let merging traffic into their lane. Both of these situations can result in bottlenecks and traffic buildups. Instead of utilizing both lanes for maximum throughput, many drivers will try to take the “high road” by merging early, even though this will only increase the overall pain everyone feels.

The Verdict Is Still Out On The Zipper Merge

Despite the growing popularity of the zipper method among highway officials, some states are hesitant to back the zipper merge. States like California hold that the early merge is the best way to combine two lanes because it does not cause sudden braking or rear-end collisions. The Federal Highway Administration does not have an official stance on whether states should promote the zipper merge, but there is still lots of research that needs to be done before one method is adopted on a national level. Either way, transportation experts will need to find a solution that is best regarding efficiency and can be used by drivers who may feel insulted by other drivers who utilize the preferred method! Are you looking for the best traffic equipment? Find the best selection, prices, and customer service with our traffic cones for sale today!

No, Hoosier hospitality isn’t dead, but INDOT is making the 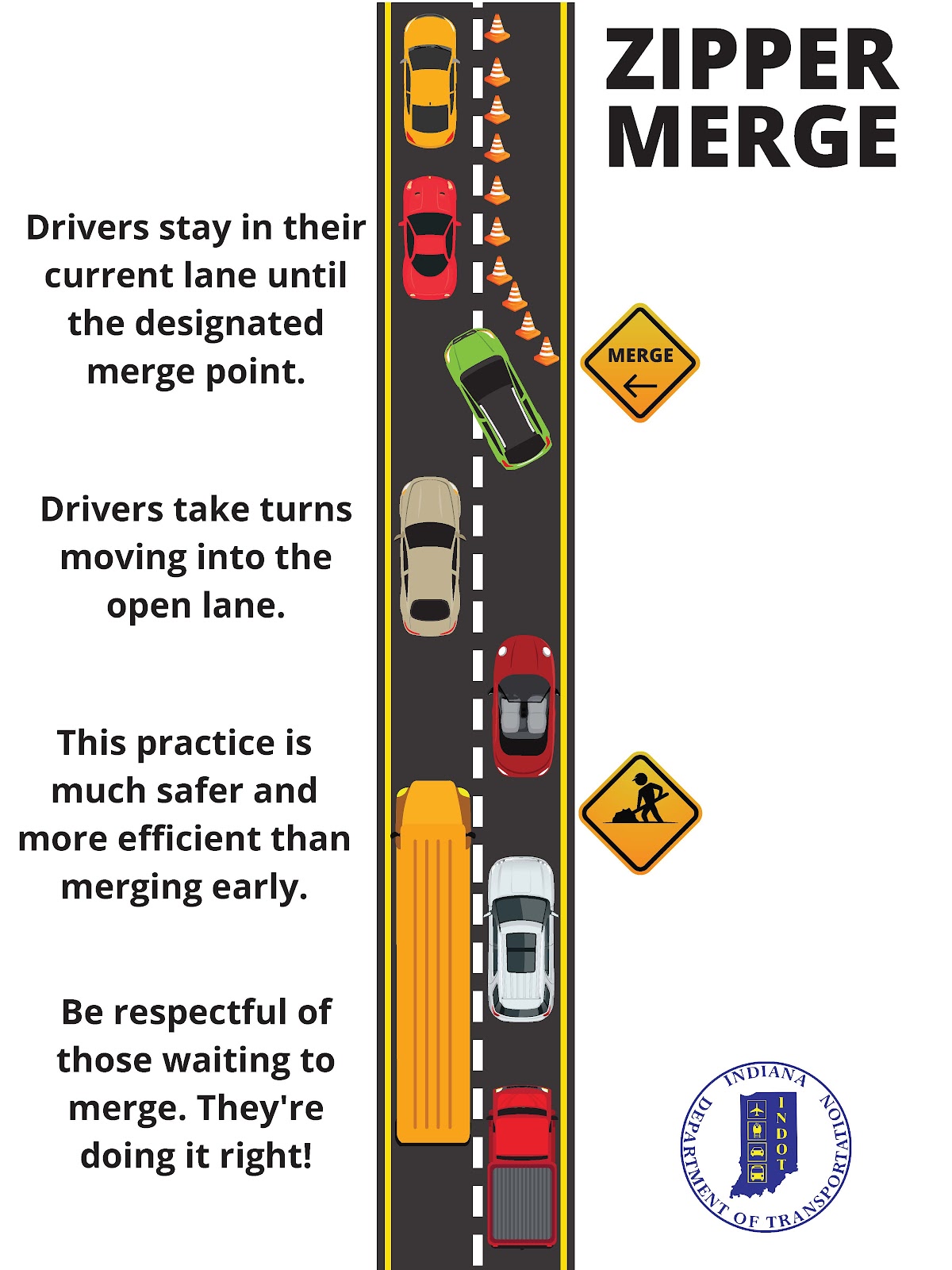 transition from merging early to merging late with more widespread use of the zipper merge.

#1 HALLOWEEN HORROR TALES FROM THE ROAD

It’s that time of year again where we’re heading into corn stalks, pumpkins,scarecrows,hay bales, and all the pumpkin spice coffee you can drink!

There’s always the horror stories from drivers and the weird things they have seen out on the road around this time of year as we go into the fall season. You have the stories like the ole song PHANTOM 309 by RED SOVINE. The old tale of the black dog, kids being pranksters and dropping pumpkins off the overpasses, so they splat all over the road, and we can’t forget the all dreaded HELLS NIGHT in Detroit. I’m sure we have fellow drivers out there that have more tales, which I would love to hear. So anyone with a good story please share it with us via email or you tube or in the chat please. Well try and share them on the next show.

So here’s the story I remember I wanted to share with everyone. This was 5 or 6 years ago. There were a couple kids being kids, just north of Indianapolis on I65. One of the kids was hanging a concrete block off the overpass by a rope, just low enough so drivers could see it in front of their windshield. As drivers would approach they would pull it back up just in time before the vehicle would hit it. The horrific problem occurred when the young man didn’t get the block pulled back up in time and a semi hit the block and slammed it through the windshield which was still hooked to the rope that was wrapped around the young man’s arm. Yes, it ripped the boy’s arm off immediately! The shitty part of this story is they arrested the truck driver! Dick

#2   WOMAN GLUES HER VAGINA SHUT TO FRAME HER BOYFRIEND

A woman glued her vagina shut as a bizarre bid to frame her ex-boyfriend for kidnapping and abuse is jailed for 10 years in Spain.

Vanesa Gesto accused Ivan Rico, 36, who spent several days on remand in prison before her lies unraveled when CCTV footage showed her buying a kidnap kit. From a Chinese run supermarket where she purchased knives that she used to hurt herself with. She accused her former boyfriend of abuse and squeezing a tube of glue in her private parts before dumping her on the street.

Aaron Young was the spelling bee champion of Connecticut in 1994, which obviously did not carry over to his real life. He worked at the local Healthy Choice  processing company that makes a variety of soups and premade meals that are distributed across the country. He was fired on Monday for throwing out all the F’s from the alphabet soup he was inspecting. The forman noticed he was taking an unusual amount of time to go through the ingredients as they went down the line. That’s when he noticed that Aaron was removing something and came to find out it was the letter F from soup letters.

He was approached and asked why he was doing it? The only answer he had for the foreman was he hated that letter, it was the letter he missed in 1995 that lost him the spelling bee title for that year! It just goes to show that home schooling creates some different souls. Is that why they say? Watch your P’s and Q’s!

Dale and Marsha Ruperight are suing local small town reality star Ellis Crawford, known for his local cable network show Dream Home.  This is where he receives applicants’ stories why they would be worthy of a home makeover. He uses his own money plus the sponsors and advertisers money to do these beautiful homes. Sort of a knock off from other like minded shows. But hey he helps people in need. The only problem with the show was that  the Ruperights lived next door to the property where they were to do a complete teardown and start over. A complete brand new house was to be built for a deserving couple, so they thought. The demo crew showed up and tore it down completely. Once they were done Ellis was informed that they tore down the wrong house. The Ruperights attorney was not available for comment.  He will have his day in court. Just goes to show there are idiots everywhere!